The reader is asked to review the sections in sequential order as each succeeding section builds on a previous section.

In this section we go over in detail a method of determining the region of convergence of annular power expansions in concentric rings around the origin. This method is described here: On the Branching Geometry of Algebraic Functions

In previous sections we described the geometry of an algebraic function: Setting the resultant, $R(f,f_w)$ equal to zero identifies the singular points of the function in the $z$-plane, and we can then sort the values in order of increasing absolute value thereby creating a set of concentric rings around the origin between which the function is analytic and splits or ramifies into branches of varying cycles. Around the origin and each singular point, the function also ramifies. Using the Newton Polygon algorithm, we can compute power expansions at a point. And using Laurent's expansion theorem applied to algebraic functions, likewise compute power expansions of the function in the annular regions between rings. This section is about computing power expansions in these rings. But both methods do not help us determine the region of convergence of these series. In this section we go over both a geometric method to compute the convergence domain of these ring expansions and Mathematica code to implement the algorithm.

This is described in the following sections:

The singularities of the function are easily computed with the NSolve. However, NSolve will include multiple roots and these will interfere with the construction of ring and annular regions. We therefore delete duplicates. But before we do, we must have a way of comparing floating point numbers. Either we can extract a defined number of digits of the number as is done further below or we can set the precision of the singular points to the same value. This allows Mathematica to make exact comparisons. The code below uses the later approach:


Additonally, we need to calculate for each singular point, a circular integration path that we will use later to compute the monodromy. We choose this path such that the radius is smaller than the distance to the nearest singular point while remaining in the bordering rings.

The regions between successive rings become the annular regions. In practice, we make the regions slightly smaller than the actual values of $r_i$ so that we can later integrate over the perimeter of the regions without integrating too close to a singular point. For convenience, the last region, $r_{18}$ is arbitrarily set to the value of the last ring plus $4$. $r_{18}$ is equivalent to an annulus around infinity.

Within the annular regions, the function ramifies into branches of various cycles with the total cycles equal to the degree of the function. One method of determining the branching is to integrate around each branch surface over $2\pi$ routes. If at the end of a circuit, the function returns to the same starting value, then we have identified a $1$-cycle branch. If a $4\pi$ route is needed to return to the same starting point, then we have identified a $2$-cycle branch. And so forth. This however requires a method of comparing approximate floating point numbers. As stated earlier, we could adjust the precision of the results and have Mathematica determine this but we choose a different approach: We extract a subset of digits of the number and discard the rest. If our accuracy level is much smaller than the smallest difference between branches and if the integration is done with a high level of working precision, then this method works extremely well.

In the Mathematica code page is the listing for the function getDigits. This function takes a floating point number and a accuracy size and returns an integer representation of the number. For example, consider the following code:

So that we can convert floating-point numbers to exact integer sequences and therefore make exact comparisons of numbers to a desired accuracy. 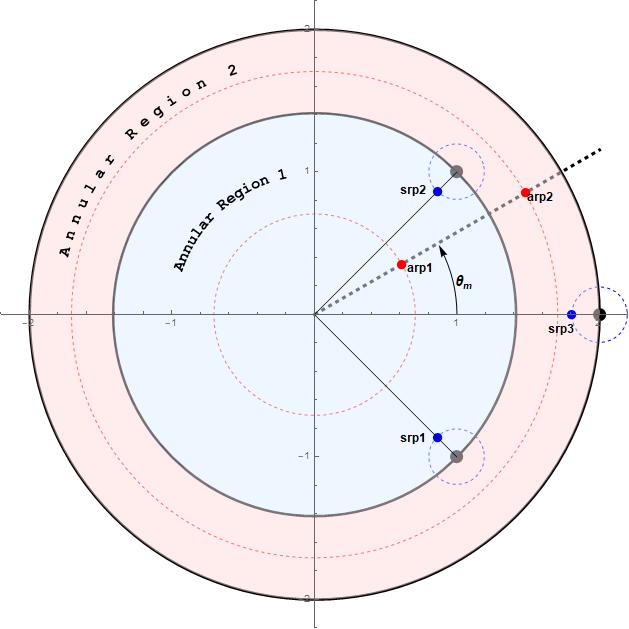 And looking carefully at the starting and ending values of each root we see $w_1$ goes back to $w_1$ meaning this is a $1$-cycle branch, and $w_2$ goes back to $w_2$. So that we have the local ring monodromy for the first ring as $\{\{1\}\},\{2\}\}$. However this is a very simple example to illustrate the algorithm. For more complicated functions, we will have to dynamically adjust the step size and working precision of the integration to achieve a $5$ digit accuracy. The following are actual results for computing the ring monodromy of a $10$-degree function. Deducing the ring monodromy for this ring is left as an exercise for the reader.

We now review the task of coding the monodromy algorithm. To do this we use the the flowchart in Figure 2. The crucial step in the flowchart is the adjustment of accuracy and precision of the numerical integration: we start the integration with a step size of $1/1000$ and $20$ digits of precision. If the digit comparison fails to obtain a match, we increase the precision and decrease the step size and re-integrate until we have obtained a match at a desired accuracy or exceeded a step size of $1/50000$ and $50$ digits of precision. In practice, if the smallest annular size is greater than $1/20000$, then a random $10$ degree function can usually be successfully processed with this level of precision. Otherwise, the algorithm will terminate and further analysis will be needed to determine the cause of the failure.

An to optimize the code we use the Parallelize command for a multi-core processor application: 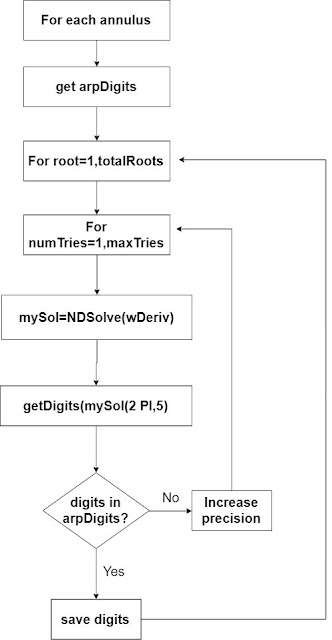 Analyzing both the annular regions and singular points, we obtain the list of monodromies in Table 4.

We compute singular monodromies using the same method to compute annular monodromies: we integrate the azimuthal equation over the singular integration paths of each singular point. The results of these calculations are shown in Table 5.

A characteristic feature of algebraic functions is the effect a singular point has on the surrounding branches. With the exception of the origin, poles, and the point at infinity, the vast majority of singular points of a random function will ramify into a $2$-cycle branch. The remaining covering will be unramified. It is for this reason, annular branches are often analytically continuous across singular points with their associated power expansions having regions of convergence extending beyond the nearest singular point. And current methods of computing power expansions do not provide a means of determining the convergence region of the expansion in the general case. In this and subsequent sections, a geometric method is described to determine the region of convergence of algebraic power expansions.

A necessary condition for extending a annular branch across a singular point is that the next annular region must contain a branch with the same cycle type. For example, if we are considering extending a $2$-cycle branch from $a_i$ to $a_{i+1}$ then $a_{i+1}$ must also contain a $2$-cycle branch. Likewise for other branches. Therefore, our first concern is to determine which branch continuations are supported across intervening singular points. Let's consider the first and second annular regions in Table 4. $a_1$ contains $\{1,3\},\{2\},\{4\}$ and $a_2$ contains $\{1,2,4\},\{3\}$. Since $a_2$ does not include a $2$-cycle branch, $\{1,3\}$ cannot be extended into $a_2$. However, there are single-cycle branches in $a_2$ so one of the single-cycle branches can be extended into $a_2$. Thus, we have continuation support for the $\{2\}$ and $\{4\}$ branches. When we do this analysis for all the annular regions, we obtain the results in Table 5. And one important point to note about Table 5 is the inclusion of support across poles however these continuations will include meromorphic branches. That is, one or more branches will include a pole.

A second necessary condition for branch continuations is that the intervening singular points must support a sufficient number of single-cycle branches to continue the annular branch into the next annular region. Consider again Table 5 and the $\{1,2,4\}$ branch in $a_2$. Even if $a_3$ contained a $3$-cycle branch, we could not continue the branch into $a_3$ because the intervening singular point does not include three single-cycle branches to allow analytic continuation of each sheet of the $\{1,2,4\}$ branch into the next annular region.

A sufficient condition for branch continuation is homomorphic continuation of each branch sheet across intervening singular points onto a branch in the next region having the same cycle sequence. Consider again the $\{1,2,4\}$ branch in $a_2$ above. In order to continue this branch into the next annular region, we must first have three single-cycle branches across the intervening singular points and then analytically continue this branch across those singular points onto another three cycle branch such as $\{3,4,1\}$ such that sheet $1$ of the branch in $a_2$ continues onto sheet $3$ in $a_3$, sheet $2$ in $a_2$ continues onto sheet $4$ of $a_3$ and sheet $4$ of $a_2$ continues onto sheet $1$ of $a_3$ or: $$ \begin{array}{cccc} 1 & 2 & 4 \\ \downarrow & \downarrow & \downarrow \\ 3 & 4 & 1 \end{array} $$

In order to implement an algorithm to determine branch continuations, we first consider the simple case of the ring diagram in Figure 1 and this time include the branch continuation path to determine if a branch in $a_1$ continues across the singular point at $1+i$ and into $a_2$. The path we will construct is shown in Figure 2 as the red, blue, green, yellow and purple legs. And keep in mind, we will only consider such a path when support is established and the intervening singular points contain the required number of single-cycle branches. 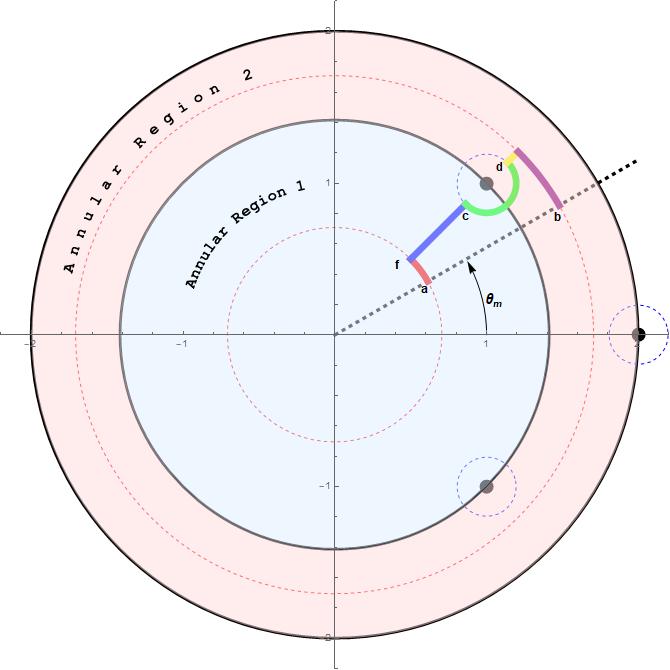 Explanation of Table 6: Table 6 details the annular branching geometry of the function. In the fourth column we have the annular monodromies with arrows connecting the branch continuations. Some branches are restricted to a single annulus. First consider $a_1$ with branches $\{1,3\},\{2\},\{4\}$. It should be obvious now looking at column 3 that branch $\{1,3\}$ cannot be continued into $a_2$ since $a_2$ does not support the continuation. Less obvious is the fact that $\{4\}$ is also not continued. This is due to this branch impinging upon one of the singular branches of the intervening singular point. However, we find arrows connecting the $\{2\}$ branch to the $\{3\}$ branch in $a_2$ which in turn has an arrow to the $\{3\}$ branch in $a_3$ and then another to the $\{3\}$ in $a_4$. This indicates the $\{2\}$ branch in $a_1$ continues across three singular points into $a_4$. 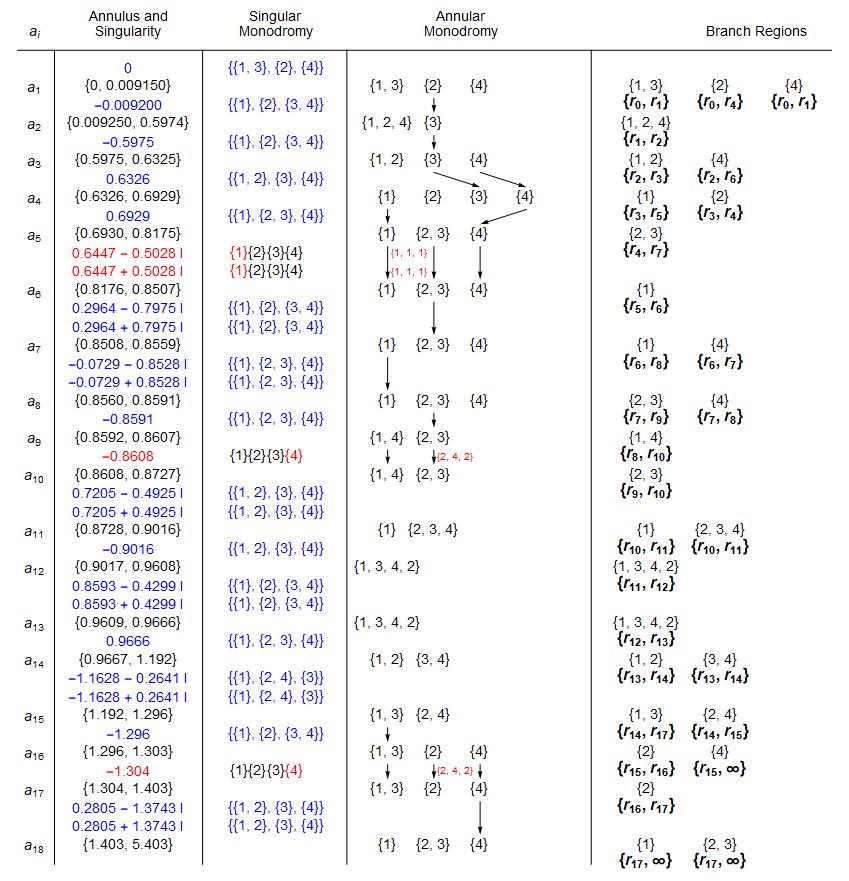 In cases involving poles, we can determine which branch sheet is affected by the pole by computing the Puiseux expansion around each singular point and then computing the value of each series at the singularity reference point $c$ in Figure $2$. We use the following steps:

Branches impinging upon a pole are indicated by a red pole sequence next to the continuation arrow in Table $6$. For example, consider branch $\{1\}$ in $a_5$ where we show in Table 5 the branch continuing into $a_6$. However, in this case, the branch continues through a pole. We identify pole sheets in the singular monodromy as red terms in the third column of Table 5. In the case of the poles between $a_5$ and $a_6$, only one sheet is polar. And to further identify how the pole sheets are affecting the branches, we have the red designation $\{a,b,c\}$ along a continuation arrow directly across from a pole. This indicates branch sheet $a$ of the indicated continuing branch is impinging upon the pole sheet $b$ of this singular point and continuing onto $c$ of the next annulus. In the case above, sheet $1$ of branch $\{1\}$ in $a_5$ is contiguous with pole sheet $1$ of this pole and continues onto branch sheet $1$ of branch $\{1\}$ in $a_6$.

We will go over an actual computation in detail using the function above and the following table: 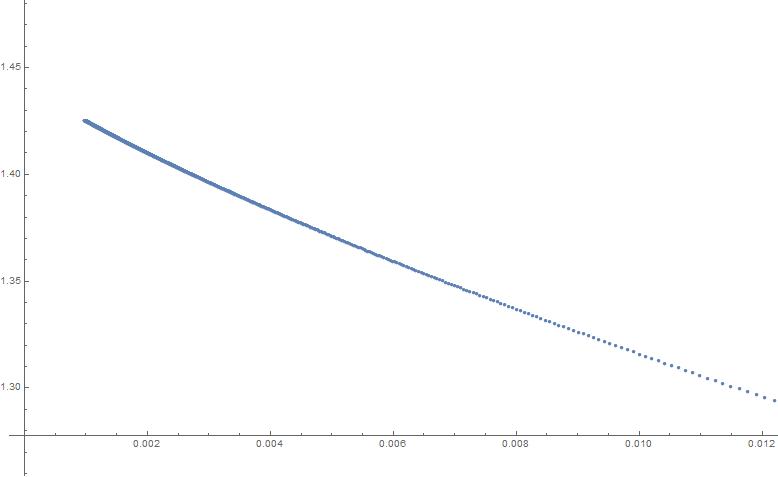 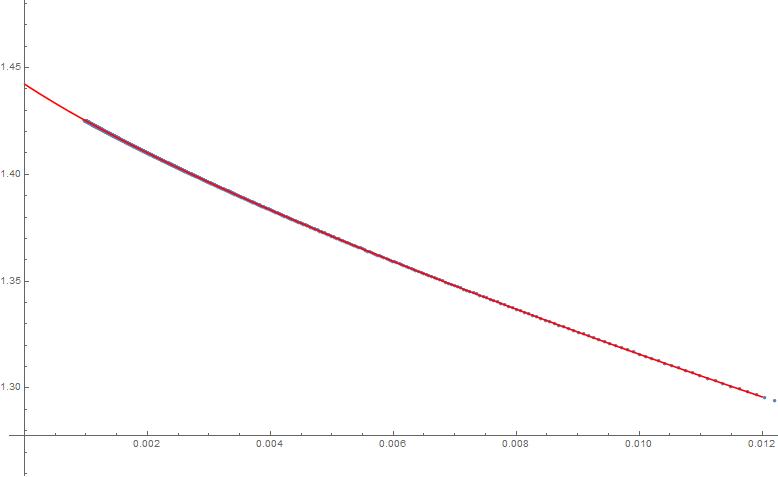 However, the power expansion may take time to settle down into its regular behavior. Table 8 gives the results if we use increasingly fewer terms of the series from $f_{873}(z)$ through $f_{273}(x)$.

However in the case of annular Puiseux series, we encounter some complications which are interesting in themselves and we treat that subject in a separate section. Refer to Section 13: Analyzing the Annular Laurent Integrals.