Please note it is important to study Section 1 before reviewing this section as this section makes frequent reference to Section 1.

Although we analyzed a complicated functions in Section 1, for this section we will begin with a simple function: $$f(z,w)=z-w^2.$$

This of course is the square root function and we know $\displaystyle\frac{dw}{dz}=\frac{1}{2w}$. And using the azimuthal and radial equations described in Section 1, we can easily plot the real and imaginary surfaces shown in Figure 1. 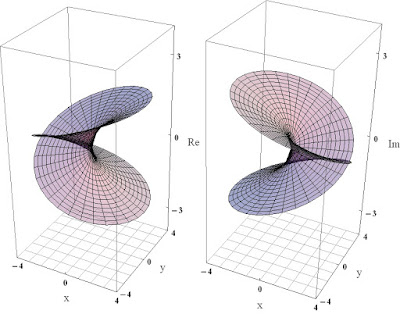 Figure 1: 2-cycle branch of square root
And now we wish to evaluate $$\mathop\bint_{z=e^{it}} w(z)dz$$ and note that the integration path has a winding number of two since this is a $2$-cycle branch. It's important to note that when the integration path circles once around the $z$-plane and returns to $t=2\pi$, we have not returned to the same location on the branch sheets. This is illustrated in the first row of plots in Figure 2 where we have plotted a $2\pi$ path around the branch sheets. It may appear that the path has returned to the same spot in the imaginary component of the branch sheet but that is only the imaginary component. The real part of the path, as shown by the first plot in the first row, has not. Only when we follow a $4\pi$ path do we return to the same complex value. This is shown in the second row of plots.

The concept of circling $2n\pi$ completely around a $n$-cycle branch is one of the most important concepts to understand in this exercise as it will allow us to apply both Laurent's Theorem and the Residue Theorem to algebraic functions.

In this example, we can evaluate the integral algebraically with the substitution $z=v^2$: $$ \bint \sqrt{z}dz=\int_{0}^{2\pi} v(2v)dv=\oint 2v^2 dv $$ and note that through the mapping $z=v^2$, we have changed the limits on the integral from $4\pi$ to $2\pi$ and therefore use the customary integral notation in the last expression signifying we are traversing a single $2\pi$ route in the $v$-plane. We will analyze this expression carefully as it will serve as the foundation for understanding how Laurent's Theorem and Residue Theorem can be applied to algebraic functions.

First, let's consider the mapping $z=v^2$. This is mapping a double covering of the complex $z$-plane to the $v$-plane as shown in Figure 3 and is of utmost importance in understanding this section. 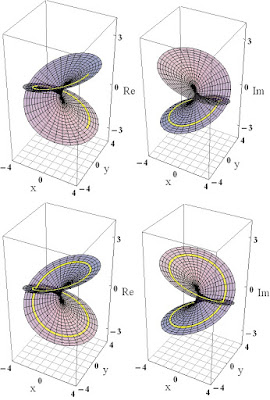 Using the technique in Section 1, we integrate the differential equation $\frac{dw}{dt}$ using the code

w[t]/.mynumer=NDSolve$\big[$w'[t]$\displaystyle \frac{dw}{dt}$,w[0]=$w_0$,{t,0,tend}$\big]$
u[t]/.mydenom=NDSolve$\big[$u'[t]==$\displaystyle\frac{1}{n \left(u^{1/n}\right)^{n-1}} \frac{dz}{dt}$,u[0]=$u_0$,w,{t,0,tend}$\big]$
However, we are confronted with deciding what initial conditions to use. In this example we have two $4$-cycle branches and therefore, for $z_0$ there are sixteen possible initial conditions: for each sheet on $w(t)$, we have four initial conditions to choose from on $u(t)$. It turns out with regards to computing the power expansions, it does not matter which one we choose from: we still obtain, in the case of $4$-cycle branches, four versions of the same power expansion $\displaystyle\sum_{n=-\infty}^{\infty} a_n \left(z^{1/4}\right)^n$ and we wish now to tabulate the first four terms of four of these expansions to experimentally confirm this and then attempt to explain algebraically why this is so.

From Section 1, we determined that the point $(1/2-1/2i,2.0043-0.2869i)$ was on the red branch of the function. We used that point as the initial condition for the azimuthal equation and integrated over the whole branch. We could then determine the remaining roots of $z_0=1/2-1/2i$ on this branch by simply finding $w(t_0+2k\pi i)$ from the solution of the azimuthal equation. However, these numerical results might be slightly off due to numerical errors. A better approach is to then compare these 4 values computed by numerical integration over the branch to roots calculated directly by NSolve which is much more accurate, and then use those roots as the initial starting points on the branch. We then compute the four roots to $\sqrt[4]{1/2-1/2i}$ and use those values for the starting points for that branch. We then tabulate four versios of the integrals $a_k$ and $b_k$ in equation (4) above according to which roots we used as the initial values for the integration and formed the resulting power series. The following Mathematica code does this (note the scroll bar):

And we need to study these four solutions carefully because they are four ways of representing the same $4$-cycle power series and any one can be used to generate the entire red branch described in Section 1 although more than four terms of the power series would probably be needed to generate an accurate plot of the function.

The first thing to note about the series is the $\displaystyle\frac{k}{z^{1/4}}$ term which means of course $\displaystyle \lim_{z\to 0} w(z)=\infty$ for this branch. This was mentioned in Section 1 where we truncated the graph of the function for a better looking plot. The function $w(z)$ will tend to infinity at the origin whenever $a_n(0)=0$ as is the case with this function. However the remaining branches do not tend to infinity and if we computed the series for the two remaining $4$-cycle branches, both would contain no negative powers of $z^{1/4}$.

The second feature of these series is that they are the same $4$-cycle series and we can interpret the series in two ways: 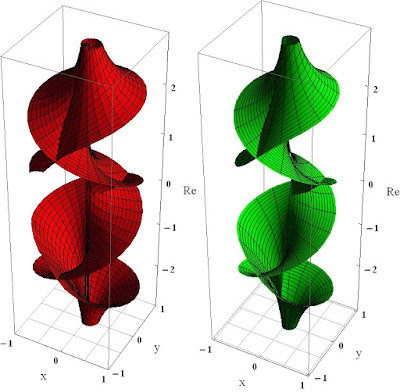